Girls: A Comic Series By Jonathan and Joshua Luna 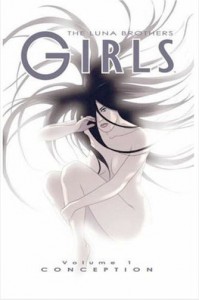 I don’t want to ruin the surprise, so I won’t say anything else about the plot of Girls, a sci-fi/horror American monthly comic book limited series, created by Jonathan and Joshua Luna (the Luna Brothers) and published by Image Comics between 2005 and 2007 (here Image Comics Girls’ official page).

So, why do I mention Girls here in PostApocalypticA? You might think that Girls is far from being a post-apocalyptic comics. But I disagree on this.

The coming of these strange women basically represents an apocalypse for Pennystown. Girls is a tale of a town community in deep crisis, whose survival is on the stake. As comicbookresources.com reviews, in Girls “real people with real lives are caught up in an inescapable situation, each one expressing their own points of view on not just what’s happening around them, but also inside them and in their personal relationships”. And the emotional dynamics in the characters and in their relationship in Girls has many similarities with what we find in post-apocalyptic scenarios where a community – or part of it – has to deal and cope with unforeseeable events and tragic turnovers, having just to rely on itself to survive. And you can definitely feel it. 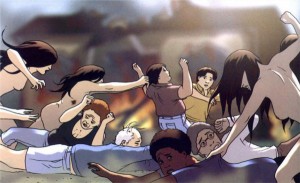 In Joshua Luna’s words: “We wanted the population of Pennystown to be considerably low, even for small-town standards, in order to heighten the sense of fear, isolation, claustrophobia and helplessness once this alien threat arrived”. 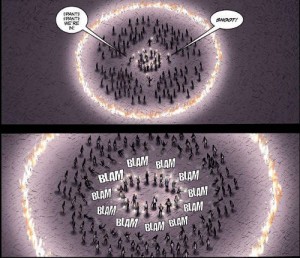 And while Girls has been compared to Lost, Heroes, 52, and Y: The Last Man, in many ways it indeed resembles The Walking Dead (that too published by Image Comics). For example, the officer Wes, one of the main characters, charged with maintaining authority and keeping the people of Pennystown alive and safe, struggles because as a policeman he’s constantly pushed to the precipice of morality, especially when it concerns what to do with the “girls” he and the survivors capture. And he becomes in the book a real leader, growing through mistakes and tragic events, choices and consequences, as Rick in The Walking Dead does.

Many sub-themes running in this series – gender relationship, leadership, morality, death, betray, friendship – make Girls – apparently a good reading and nothing more – a deeper and interesting story, that should be read by a wider audience than zombies aficionados only or comics lovers only.

And I’m sure you will enjoy the series as I did, thanks also to the surprising plot, full of tension and humour, the attention to the characters’ psychology and the beauty of the artwork, with nice touches – I loved the blurring and the zooming scenes and the choice of the colours among the others. 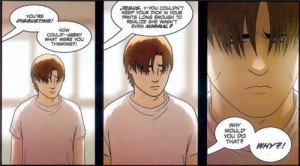