Electric City: A Post-Apocalyptic Vision By Tom Hanks And Yahoo!

Electric City is an interesting animated web series created by Tom Hanks and available for free on Yahoo!’s Electric City website only.

Released in July 2012, this post-apocalyptic, dystopian series contains 20 short episodes (approx 5 mins each, with a total running time of 90 mins). Watch the teaser:

The story was born from Tom Hanks’s creativity, who began writing it in 2003, and then worked on it at Playtone, his production company, until Yahoo! purchased the production with the idea to make an online blockbuster of it. Hanks also voices lead character Cleveland Carr, and has been given total freedom in the development of this production: his role in Electric City has been significant. 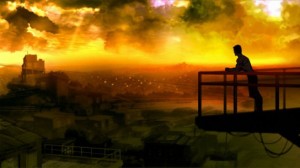 Yahoo! built the website and developed interactive content around the series, including the ARG (Alternate Reality Game) Tap Joint (a pre-launch mistery game and blog) to create buzz for the debut of the series and other material available in Electric City’s website such as 3D maps of Electric City, behind-the-scenes clips, casual games, characters’ back-stories and discussions.

Jump Games, partner of the project, also produced an app for iOS and an app for Android offering 2 prequel graphic novels, games and a behind the scenes, and the RPG Electric City Revolt.

Electric City takes place in a post-apocalyptic setting where mankind is reduced to small settlements whose main business is to produce naturally created electricity. Electric City is actually a collective name for several geographically separated precincts. The series examines themes like energy consumption and crisis, freedom of information, crime and punishment and has noir, violent and dark tones – not suitable to younger audience. 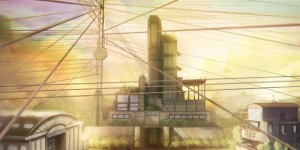 This is how Tom Hank describes the world that Electric City takes place in, in an interview with the New York Times on Electric City:

“We were aiming for something other than the build-up to the collapse of the world, or the immediate dystopia that exists right after it. This is now onto the third or fourth generation, after the pioneers have established everything. If you took American history, it would probably exist somewhere about 1720. As time went by, they were able to develop a version of society, but it’s not Version 2.0. It’s like Version negative 0.6. It’s smaller, it’s primitive, it’s very dangerous – you could die if you get a toothache. Winters could kill people. We took away all of the digital world, more specifically the binary world. There are no more 1’s and 0’s that you can string along. The hardware is gone. Everything that had become a common possession and part of the way society worked is gone. And it disappeared because, essentially, the power went away. The grid disappeared.”

The buzz and numbers generated by Tap Joint were good (1 mln page views, 300k unique visitors spending on their return 30 mins time), but Electric City was (probably) not as successful as expected in terms of audience and web metrics – at least not enough successful to justify a second season. 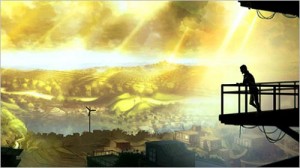 But while there are flaws in this production (dialogues, for example), Electric City is overall really enjoyable, the graphic is great, the pace is steady, the plot offers surprises and the characters are real, not black or white only. And it makes you think.

As McPherson, Yahoo! vicepresident said: “It’s adult, evocative and raises big, heady questions about what kind of society we should be living in. But it doesn’t pander — it embraces ambiguity. It requires the audience to work to figure it out.”

The recent winning of the 2013 Streamy Award in the category Best Animated Series awards the quality of Electric City.

And while some criticized the decision to produce Electric City as Internet series only, observing that web series don’t seem to have reached their maturity yet, another really interesting futuristic web series has just aired its first season finale and is approaching the second season: H+. This is a YouTube series distributed by Warner Bros Digital Production and YouTube itself, depicting a future in which a virus has wiped out most of the human race, and those still alive have their minds linked to the Internet 24 hours a day.