Are a zombie fan? You will love these zombie apocalypse maps! I have selected 4 of the most popular zombie-inspired maps for you:

It tracks danger zones with high concentrations of people, and the location of  useful places where to find food, fuel, guns, and of places to avoid such as hospitals or cemeteries.

Just enter in your address and click “Survive” to make the zombie survival map appear. You can use the map to plan your survival in advance, or to run away from the zombies hordes, if Internet is still on – in this case don’t forget to check also videos showing key zombie survival skills, like this:


And why don’t try the related free iphone game app Map of the Dead available on itunes? 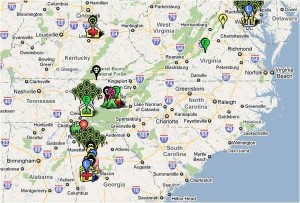 Are you addicted to the Robert Kirkman’s zombie comic book or TV-series The Walking Dead? If so, you will enjoy the complete annotated map of appearances, deaths, events and locations.

The information comes from all 78 issues of the comic series, so you are warned: it contains spoilers! 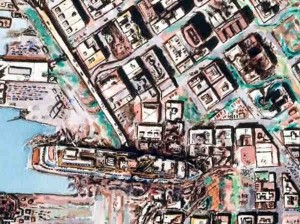 Are you living in Seattle? Are you worried about the zombie apocalypse?

Get a doomsday map of Seattle! The map has been created by Tony Dowler, a local artist, and spread after a successful Kickstarter’s project, which raised $18,386, where Tony asked for $1,500 to print copies of his map.

The huge map, watercolored and enriched with ink and pen, is based on an image taken from Google Maps, and shows the effects of a zombie aftermath in downtown Seattle.

It took Tony an hour a day for a year to paint the doomsday map, but the results are great, and so is the attention to the details: the map is extremely detailed, and includes roads, buildings, habitable and zombie-infested areas, collapsed buildings, neighborhoods devastated by fire, water and returning nature, ruins, vegetation, structures, and even skyscraper shadows, survivor hideouts, car crashes and abandoned cars on the highway.

This zombies map has been created by the Oxford Internet Institute, a department of the University of Oxford for the multidisciplinary study of the Internet, which produces engaging maps and graphs.

The researchers have used online data from Google’s searches and other content stored around the globe, to represent graphically the number of references in internet to the term “zombies”.

The map is basically a kind of demo of the activities of the Institute showing how huge data could be analyzed, geolocalized and visualized on a map, and has obvious limits: what the map shows is that searching for “zombies” is prevalent where there are a lot of people speaking English, and U.S., Europe, Japan and a few cities in Australia indeed come up as the biggest-areas of zombie-interest.