Wasteland is a Simpsons’ webcomic created by Jack Teagle showing The Simpsons in a post-apocalyptic twist.

Springfield has become wasteland and its Nuclear Power plant is the culprit: mutants and poisonous gas make survival difficult for the bullies Kearney and Jimbo. 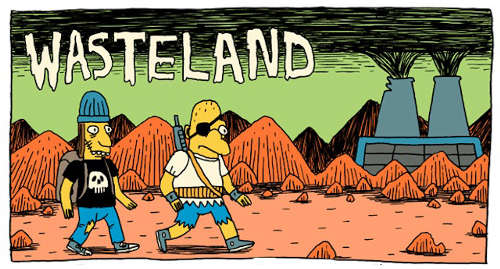 The first page of Wasteland is below. The full webcomic Wasteland is available on Teagle’s Tumblr, and has been created as part of the Simpsons Drawing Club, tumblr that hosts Simpsons comics and art.

(Do not expect anything really serious from Wasteland. You might enjoy this comic if you are a Simpsons’ fan, but dialogues and plots are cliché, and the story is just a few pages long. The idea itself is original though, hopefully something more elaborated will come out by Jack Teagle). 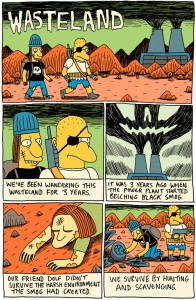